Several weeks ago we saw Monuments Men, which portrayed a side of Hitler’s mad mission we’d never known. As we watched, I suddenly found myself strangely convicted by this infamous man’s life through the things God was highlighting to me. He showed me that Hitler actually DID the very things He’s been trying to compel us to do in regard to pursuing and fulfilling His call on our lives.
He had:
~ a huge vision

~ strategic plans for how to accomplish it
~ tangible goals that he worked hard to achieve, which resulted in advancing into and taking new territory
~ passion, enthusiasm, burning desire, and zeal that enabled him to impart his vision to many others and convert them to his “kingdom” and its cause
~ focus, total commitment to, and wholehearted pursuit of his dream, regardless of the cost

Of course, though he may look admirable by these criteria, the problem was that he had received his vision and dream from the pit of hell rather than the Throne of Heaven. He truly tapped into supernatural power to help him persuade people and advance his agenda, but it was not the power of God. Once again, as God had done years before, He began to convict me through the revelation of how often those in the kingdom of darkness are much more devoted and determined to carrying out the enemy’s will than God’s people are to Him and His purpose. He brought to my remembrance something I’d shared in “Get Your Super On“:

“…He reminded me about an interview from years ago of a woman who had been delivered out of the occult/witchcraft and had given her life to Him. In the interview, she lamented that the people from her background were much more serious about and committed to fasting and wholeheartedly seeking and serving the devil (and demon spirits/”spirit guides”) than most Christians she’d met since her conversion were to wholeheartedly seeking and serving the Lord. … You may need to read that again … What a tragic observation! When we see the dedication of those serving the devil and the supernatural power they’re operating in as a result, if we weren’t already motivated, this should convict, provoke, and compel us to get focused, committed, and determined to seek the Lord wholeheartedly, to do His will, and to fully walk in all He has provided. God forbid that those who follow satan, whose ultimate design is to eternally destroy them, should be more dedicated to seeking him and carrying out his will than we are to seeking our Lord and doing the will of the One who paid the ultimate price to save us! We owe him EVERYTHING!”

The following Sunday, as we listened to our church’s guest speaker from Uganda (Pastor Deo Musoke), God confirmed that He truly is emphasizing this message again. Pastor Deo began to share about what a busy time of year the coming season (leading up to Christmas) is for satanists. He talked about how dedicated they are to fasting and other spiritual disciplines in order to keep themselves in position to operate in the greatest amount of power possible so they can stir up the maximum trouble during this time. The implication was that many of God’s people are far less committed than these satanists – and that has to change. We knew it was no coincidence that we were hearing this testimony within the same week God had been stressing these things to us again.

Afterward He began showing us through multiple avenues that according to His assessment many are “dead” or almost “dead” (“mostly dead” – for Princess Bride fans) (as in Revelation 3:1-6) or “lukewarm” (as in 3:14-22) toward Him and/or His call on their lives who may not realize it. He emphasized that we must “Rouse [ourselves] and keep awake“ (Revelation 3:2). He also spoke in terms of needing to be “SERIOUS” about His call (not “half-hearted,” apathetic, complacent, passive, lacking vision, purpose, passion, desire, motivation, etc. which He defined as “playing games”). He emphasized Romans 12:11:

Never lag in zeal and in earnest endeavor; be aglow and burning with the Spirit, serving the Lord. AMP
*****
Never be lazy, but work hard and serve the Lord enthusiastically. NLT

He also brought back to mind this verse He’d given often in the past season:

Therefore, my beloved brethren, be firm (steadfast), immovable, always abounding in the work of the Lord [always being superior, excelling, doing more than enough in the service of the Lord], knowing and being continually aware that your labor in the Lord is not futile [it is never wasted or to no purpose].

Through Revelation 3:14-22, He re-emphasized that He’s calling His people to repent and once again be white-hot on fire for Him and His purpose. From the AMP version of this passage, He highlighted the words – ENTHUSIASTIC, IN EARNEST (which went along with previous words He’d given – SERIOUS and FERVENT), BURNING (which went along with the theme of being ON FIRE), and ZEAL (a word He’d previously stressed through Rom 12:11 and others). Then from Revelation 4:5, He showed me that His 7-fold Holy Spirit is represented by 7 blazing torches burning:

Out from the throne came flashes of lightning and rumblings and peals of thunder, and in front of the throne seven blazing torches burned, which are the seven Spirits of God [the sevenfold Holy Spirit]; 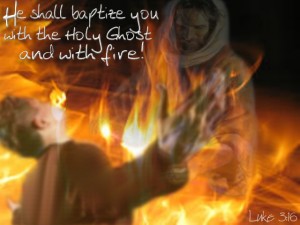 It’s no accident that in the midst of a series of words about His people needing to be BURNING with ZEAL and ON FIRE for Him and His will that He led me to this passage to remind me that His Holy Spirit is a BLAZING, BURNING FIRE. Therefore, if we need more FIRE in our lives, we need more of His SPIRIT. Again, this goes back to the message of “Get Your Super On.” The only way for us to get in and be kept in this condition He’s requiring is to be baptized in and ever-filled to overflowing with the Holy Spirit.

The very next day after He showed me these things, we were OVERWHELMED when we turned on a past Joyce Meyer episode (trying to catch up from several weeks behind) and began hearing precise word for word confirmations. She said,

“The Bible teaches us from Romans 12:11 that we are to be FULL OF ZEAL, ENTHUSIASTIC, and ON FIRE. …God just seems to like FIRE. The Bible says that our God is a consuming FIRE (Heb 12:29). He appeared to Moses in a BURNING bush…. He [led Israel] with a pillar of FIRE at night. Sacrifices had to be offered by FIRE. On Pentecost the Holy Spirit fell and tongues of FIRE settled on the people. Jeremiah said ‘His Word is like FIRE shut up in my bones.’ II Thessalonians – He will be revealed from Heaven in a BLAZING FIRE. In Revelation He’s depicted as having eyes of FIRE. And I love this one – a FIRE goes before Him and BURNS up all His enemies. Maybe if we had a little more fire, we’d have less trouble with the enemy.”

This past Wednesday night, during our mid-week prayer service, we knew our pastor must be hearing the same thing from the Lord as he prayed repeatedly for the FIRE OF GOD, for God’s people to be ON FIRE and BURNING for Him. We were also blown away when a guest briefly stood and gave what, for us, was an undeniable confirmation. Earlier that day, God had given me Isaiah 51 and 52 in answer to a question I’d asked. That night, this man told how God had compelled him to get up the night before to pray (the night of the 2nd blood moon) and when he finally obeyed – God gave him Isaiah 52!!! He especially emphasized the message of the first 2 verses for God’s people in this hour ~ that we must AWAKE, Put on Strength, Shake ourselves from the dust (the place of “the dead”), and Arise to take our place in God’s plan! We knew this was confirmation, not only of the passage He’d given us that same day, but of this entire previous theme.

If Hitler, inspired by a demonic vision and empowered by the forces of darkness, was able to cause as much destruction and devastation for the kingdom of hell as he did, how much more should we be able to do for the Kingdom of Heaven if we would wholeheartedly seek God’s divine vision for our lives and passionately pursue its fulfillment through the empowerment of His Holy Spirit. May God’s people never again be indicted for being less consecrated to Him and committed to His call than the degree of dedication and determination demonstrated by those serving the enemy. Thankfully Jesus’ and Paul’s words reveal that we have the ability (and responsibility) to repent (turn/change) and once again be stirred up, fanned into flame, and set ablaze by His Spirit to pursue His will. Praying this for us all! May His all-consuming fire fall upon us, burning up all that’s not of Him, and leave within us the white-hot fire of His Spirit that will never diminish or die!
Blessings and Prayers,
Laura

That is why I would remind you to stir up (rekindle the embers of, fan the flame of, and keep burning) the [gracious] gift of God, [the inner fire] that is in you…. For God did not give us a spirit of timidity (of cowardice, of craven and cringing and fawning fear), but [He has given us a spirit] of power and of love and of calm and well-balanced mind and discipline and self-control. —2 Timothy 1:6–7
*****
Those whom I [dearly and tenderly] love, I tell their faults and convict and convince and reprove and chasten [I discipline and instruct them]. So be enthusiastic and in earnest and burning with zeal and repent [changing your mind and attitude]. Revelation 3:19

And His disciples remembered that it was written, The zeal of thine house hath eaten me up. John 2:17

Burn with Me, burn for Me, and burn through Me! Burn the world up with My message of love and forgiveness. Burn with holy zeal and My love will consume every part of you. Let the coals of fire from My altar fill the lantern of your heart. Burn, burn, burn! Live burning, talk burning, sleep with a burning heart, and walk with burning feet that scream out for the Truth. The fire from My altar will consume your family with salvation’s songs. Never take your eyes off of the fire; never let it go out. Never let the flame die down to a smoldering, unperceivable light. Never live far from its warmth. It’s the fire that the ghosts of your past fear. They tremble at raging love, blazing holiness, and unconditional goodness. They cannot bear all-consuming praise, honesty, or pounding convictions. Burn now, burn here, burn forever. (Copyright, Ivan Tait, Letters from God)